J. Cole is in The Off-Season mode.

The highly anticipated album will be released on May 14th, according to the latest announcement from the Dreamville rapper. J. Cole has been teasing the album The Off Season for the past few weeks, but this is the most conclusive message we have to date that the project is finally coming. He highlighted his long absence, saying that the album has been years in the works.

“Just know this was years in the making,” Cole tweeted on Tuesday (May 4th) while sharing the cover art of himself standing beside a burning basketball hoop. “My new album The Off-Season available everywhere 5/14.”

Fans are already trying to decode the burning hoop. Last week Friday (April 30th), J. Cole gave fans a rare update on the project via his Instagram Story. Needless to say, he appears quite upbeat about what he heard, saying, “Just rode through the city to The Off-Season. Dawg… Too excited.”

Just know this was years in the making.

The Off-Season is the follow-up to J. Cole’s 2018 album KOD, which saw huge commercial success despite not a single feature being on the album. It will be interesting to see if this project will have any guest features. Don’t hold your breath for that either.

KOD has since been certified Platinum by the Recording Industry Association of America (RIAA) after selling more than a million copies by the end of 2018.

RELATED: J. Cole Announces ‘The Fall Off’ Mixtape Ahead Of New Album & Retirement

The Off-Season is perhaps the most anticipated hip-hop album this year, along with Drake’s forthcoming project, Certified Lover Boy, which has yet to receive a release date. This is shaping up to be a clash of the titans as both Drake and J. Cole have been at the top of the game over the past decade, although we can argue Drizzy more so than any other rapper.

Since the beginning of 2021, fans and experts have been trying to figure out when Drake will drop his highly anticipated album Certified Lover Boy. There have been many rumors floating around the industry, and this continues as millions wait to hear what the Toronto native has in store.

The project has already been delayed several times, which is probably why he chose to release Scary Hours 2 to keep fans satiated for a bit. As the anticipation builds, many have been keeping a laser eye on the OVO Boss’ fashion trends and social media accounts to see if there are any clues. Just a few months ago, he launched his NOCTA line with Nike after it was in the works for quite some time. Some have opined that one of the hoodies that he wore in the “What’s Next” video appears to be a part of the collection and could be a signal that the project is close to being released.

Other observant fans have realized that the “One Dance” rapper has been highlighting the Chrome Hearts brand on his Instagram Story over the past few weeks. Some believe that he’s doing this to intentionally drop clues which may lead to an upcoming collaboration with the high-end fashion line.

OVO member Chubbs sort of confirmed this after he dropped a major announcement on his Instagram page recently. While showing a few pieces from the collection on Instagram, he wrote the caption, “Certified Chrome.” He tagged Drake and Chrome Hearts.

A little while after that, he posted another video of him in the Certified Lover Boy x Chrome Hearts attire. This time he wrote: “We dress up in our own sh*t.” Drake also shared a photo of Oliver El-Khatib rocking a pair of Chrome Hearts pants. While there is still no official word on when the album will drop, it seems from the clues that he’s leaving that it may be soon, or it could all just be conspiracy theories from eager fans.

Gunna says “Solid” was originally suppose to be on Drake’s highly anticipated album.

With very little news coming in about Drake’s hugely anticipated album Certified Lover Boy, fans have been desperate to get any info. While the release date remains a mystery, it has been revealed that YSL’s Slime Language 2 standout track “Solid” featuring Drake was supposed to be featured on the upcoming album. It’s at least a little insight into the type of hot tracks Drake wants on his next album.

It’s very difficult to narrow down what type of style Drake will adopt for his next project as he’s proven time and again that he can easily switch it up. The information was revealed by Gunna while he was being interviewed by Billboard. Gunna opened up about the track “Solid” and revealed that it was destined for CLB.

“Drake had originally sent me the song for his album and I did it and we was vibing with it for a minute,” he shared. He added that when CLB didn’t come out, he asked Drake if he could drop it on Slime Language 2 instead because he felt the song had a strong vibe.

“But then his album didn’t come out and I was still vibing with it, and I’m like ‘Shit bro, I wanna put it on Slime Language 2. Let’s put slime on it.’ And he was like extra with it and we did, and that’s how that came together,” he said.

Slime Language 2 was released today, April 23, and is the follow-up to 2018’s Slime Language. Gunna described the album-making process as fun, noting that he and his fellow label mates still have great chemistry. “It was just fun. It was really like family, we just really had fun with it. It wasn’t nothing like forced or nothing like that. We kind of just had songs ready, and when we felt the right time to just put the album out, we put it out,” he said.

What’s important to note is that this track is very different from the work that Drake typically puts out. This could mean that he is taking CLB in an entirely different direction. The anticipation has certainly been building, and fans are even more curious now because they have no idea what to expect from the “What’s Next” rapper.

Drake fans have been eagerly awaiting his next body of work. They at least know that the name of the album is Certified Lover Boy and that it was supposed to be released this month, but now we know that’s not happening. Fans have continued to scour the internet, looking for any clues about what the album might sound like with very little success.

Drake has now released his first official statement on the project this year, and it is to announce a delay. While he didn’t give an official release date, he did say that it is coming in 2021. His statement comes a day after Charlie Puth sent the internet into a frenzy by suggesting that the album is coming this weekend. In a now-deleted tweet, Puth said, “Drakes dropping on the 21st.”

Drake put those speculations to bed when he wrote a message on his Instagram Story on Wednesday. “I was planning to release my album this month but between surgery and rehab, my energy has been dedicated to recovery,” he wrote. “I’m blessed to be back on my feet, feeling great and focused on the album, but CLB won’t be dropping in January.”

“I’m looking forward to sharing it with you all in 2021,” Drake added as he concluded his statement.

Most experts on the matter have opined that the album would be released in the last week of the month, including Drake’s producer Cardo. Drake continues his upward trajectory and recently scored another accolade when he became the first artist to ever hit 50 billion streams on Spotify. He’s also been seen within recent times, with Meek Mill and Lil Baby in the Bahamas reportedly filming something. The OVO boss has also been marketing the album in a big way. He even paid to have CLB hearts displayed across the CN Tower in his hometown of Toronto.

The last set of rumors about the album proved to be false. That came from Odell Beckham Jr., who said that the album would be released on January 1, 2020, during an interview: He said, “Lover Boy dropping 2021. Drizzy, I got you, man. Dropping January 1, 2021. When the ball drop, the album drop.”

Drake eventually dismissed the rumor after reaching out to DJ Akademiks, who in turn shared the news with fans by stating, “Drake reached out to me and confirmed that despite what Odell Beckham Jr said … January 1st, 2021 is not the release date of Certified Lover Boy. He’ll announce the correct date when the time comes.”

Drake also uploaded a photo to his Instagram story that shows him behind the mixing boards concentrating as if he’s putting down the final touches.

Drake think that fans will not like his new album, Certified Lover Boy, but he’s dropping it anyway.

As many rappers have repeatedly acknowledged in their lyrics over the years, having haters is usually a sign of success. It’s easy to find people with plenty of negative opinions about Drake, but that’s probably because the man simply won’t stop making hits. Drake himself acknowledged this fact, which becomes a normal part of his everyday existence when he responded to a fan during an Instagram Live session over the weekend.

Drizzy was watching his father, Aubrey Graham’s, IG Live, when he took notice of a user in the comment section who wrote, “Views be hittin different,” referring to the Canadian rapper’s 2016 album. 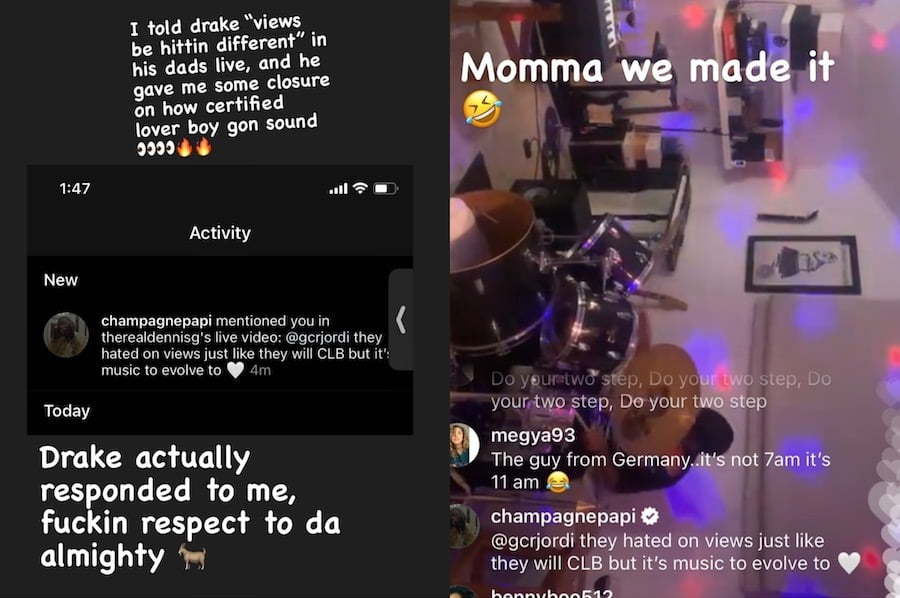 Drake replied to the comment, saying, “They hated on Views just like they will [Certified Lover Boy] but it’s music to evolve to,” adding a white heart emoji. Needless to say, the fan was very excited to have received a response and quickly reposted the interaction on social media, writing, “Drake actually responded to me, f*ckin respect to da almighty [goat].” The fan also added, “He gave me some closure on how certified lover boy gon sound.”

It was not only very cool of Drake to take the time to respond to a fan, but it’s nice to see an artist who is so self-aware and easily brushes off the criticism. Drizzy showed this same kind of awareness with a bit of self-deprecating humor when he contributed to the editor’s notes on Apple Music for his 2018 album Scorpion, writing, “I hate when Drake raps. Drake sings too much. Drake is a pop artist. Drake doesn’t even write his own songs. Drake took an L. Drake didn’t start from the bottom. Drake is finished. I like Drake’s older stuff…”

After following the criticisms up with a few more common rebuttals to his superstardom, the notes end by saying, “Drake, yeah yeah we know.”

Look out for Certified Lover Boy to drop sometime in January 2021.